Small, medium or large?
A Tai Chi Chuan form can be practiced at different frames although often times each frame has a specialized form. The frame is not synonymous with the form although it is not entirely independent of it either. Each frame has it’s own benefits. Generally, the frame is first set by the width and depth of the stance, the upper body follows the lower.

The old man frame. This is practicing naturally without thinking about the frame too much or using effort. This is a good way for beginners to learn a form or to maintain your practice if you are sick or to busy to practice properly. It has meditative benefits and is good for relaxing or practicing “fan sung.” To practice this frame, take a natural walking step forward into your or bow stance. Base your upper body from this natural stance. You should not sweat when you practice this frame.

Second in popularity is the medium frame. It is commonly taught first, sometimes it is called the tiger frame. To practice at this frame take a natural walking step forward into bow stance and mark the spot where your big toe is. Lift your foot again and place your heel in that spot. Base your frame of this stance for the medium frame.

The Large frame tai chi stance can be a little wider than the medium frame stance, but it is also deeper. This frame requires some understanding of the different muscle groups of the legs and kua, without this understanding you could damage your knees practicing this frame too much. The frame is more for conditioning and it is very good if your goal is push hands.

Small frame tai chi is difficult. It is very hard to see what someone is doing when they are practicing the small frame. The movements are small and internal. Usually, someone that can do the small frame well can also fight. I personally have not learned small frame, although I have been adjusted into it a few times. Though the stance and movements were small I was quickly sweating with burning leg muscles. 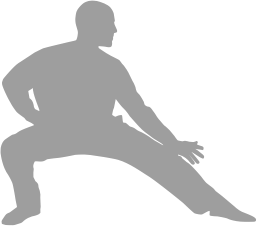